BRISBANE, AUSTRALIA – The University of Queensland announced today that it is a Grand Challenges Explorations winner, an initiative funded by the Bill & Melinda Gates Foundation.  Research groups led by Professor Paul Young of the School of Chemistry and Molecular Biosciences, and Professor Matt Cooper at UQ's Institute for Molecular Bioscience will pursue an innovative global health and development research project, titled Next-gen diagnostics for field-based surveillance of Wolbachia and arboviral infections in wild mosquitoes. 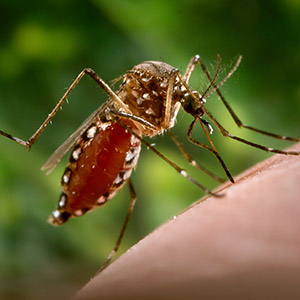 To receive funding, Professor Young and Professor Cooper and other Grand Challenges Explorations winners demonstrated in a two-page online application a bold idea in one of five critical global heath and development topic areas.  The foundation will be accepting applications for the next GCE round in March 2016.

The project aims to develop a portable tool to detect mosquitoes carrying dengue fever. Dengue virus is estimated to infect up to 400 million people globally each year. The next-generation diagnostic tool, which can be used in a field setting, uses quantum dot nanoparticles in a simple, cheap assay to measure the presence of a dengue virus protein. The test is also able to detect Wolbachia carrying mosquitoes.  Wolbachia is a naturally occuring bacterium that has been added to mosquitoes to reduce their susceptibility to dengue and other viruses.  “The idea is to test mosquitoes in the field for the presence of dengue as an early warning surveillance system,” Professor Young said.

Professor Cooper said: “We need to get the best tests we have out of the lab and into the field, where they can help identify dengue and track prevention measures in real time.  Identifying hot spots early could help us get on top of epidemics before they break out.”

UQ Alumnus Dr Joanne Macdonald of the University of the Sunshine Coast is also a Global Challenges Exploration winner, and will pursue a project entitled: A rapid field test for detecting infected mosquitoes.  Project team members include her former supervisor Professor Roy Hall of UQ’s School of Chemistry and Molecular Biosciences.Dr Macdonald has developed a simple diagnostic test able to detect multiple pathogens that reduces costs compared to performing individual assays, and does not require specialised equipment.

The University of Queensland
The University of Queensland (UQ) is one of Australia’s leading research and teaching institutions, ranked in the world’s top 50 by the QS World University Rankings and the Performance Ranking of Scientific Papers for World Universities. The University is the oldest and largest in Queensland, with 50,000-plus students engaged in more than 400 degree programs. UQ has been educating people to create change for a better world for more than a century, producing more than 225,000 graduates since opening in 1911 - including more than 11,500 PhDs, a Nobel laureate, the CEO of a Fortune 500 company and leaders in government, law, science, public service and the arts.